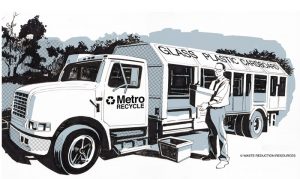 It’s important for you to know who profits and who loses from your community’s recycling collection system, so good for you for getting educated! First you need to understand the original curbside collection method. It was called curb-sort or multi-stream. With curb-sort or multi-stream the various types of recyclables (glass, plastic, paper, metals) were sorted at the curb into separate compartments on the truck.

What IS Single Stream recycling?

Single Stream recycling is a curbside collection system in which all paper, plastics, metals, glass, and other recyclables are dumped together in a single compartment truck. Glass breaks, contaminating everything. Contaminants such as beer, bleach, ammonia, ketchup, feces, motor oil, etc. spill all over everything.

Single stream recyclables are transported to Material Recovery Facilities (MRFs), where they are sorted, baled, then shipped to end-users. MRFs sort and bale solid materials, NOT liquids. Of course, contaminates like tiny pieces of glass, metal, plastic, etc. end up in bales. Liquids know no boundaries, so of course they are everywhere. How do you think liquids affect the quality of paper bales?

Obviously MRFs can’t separate recyclables nearly as well as curb-sort or multi-stream, which keeps each type of recyclable in their separate compartments of the recycle truck. Single stream supporters insist that simplifying recycling for residents will increase recycling participation since they don’t have to sort recyclables themselves, and that it will save money due to reduced collection costs.

While collections costs are lower with a single stream system, sorting costs and the costs associated with disposing of contaminated recyclables are much higher.

“By pushing to increase recycling rates with bigger and bigger bins — while demanding almost no sorting by consumers — the recycling stream has become increasingly polluted and less valuable, imperiling the economics of the whole system”. American recycling is stalling, and the big blue bin is one reason why” – Aaron Davis Washington Post, 6/20/15.

CASE STUDY: Fayetteville, Arkansas’ current curbsort recycling program is one of the nation’s cleanest, with around a 2% contamination rate. A 2016 single stream pilot study in Fayetteville “reported” more than 18% contamination. That’s likely a very conservative number, but even at 18% that’s a whopping 16% reduction in usable recyclables, and a 16% INCREASE in what can end up in our landfills.

When single stream began, bales of contaminated recyclables were often sent to China, America’s largest importer of our recycling. They have taken the single stream mess for years, but no more. In 2012, China began refusing our trash recyclables due to contamination. Now the contamination conversation has reached an even higher level with an extreme ban on U.S. recyclables. On July 18, 2017, the Chinese sent a memo through the World Trade Organization stating they were cutting off several grades of paper and plastic from the United States.

Most Americans have not a clue what happens to their recycling once it leaves their curb, so you’re ahead of 90% of the U.S. population because you’re educating yourself!

With garbage haulers in total control of the “recycle stream”, end-users are caught between a rock and a hard place. If they speak up, as the glass industry did, end-users risk having the garbage haulers pull their item from the curbside recycling collection program.

One of the most important problems with single stream is it promotes the message, “it’s ok to consume as much as you like, as long as you recycle”.

Lack of transparency in Recycling

Citizens in Chattanooga, Sante Fe, Rhode Island, Houston, Savannah, and Atlanta were under the impression their single stream collected glass was being recycled. It was not; it was going to the landfill.  In 2017 residents in Portsmouth, VA discovered their recyclables had been incinerated, rather than made into something new.

“Recycling” means the systematic collection, sorting, decontamination, and return of waste material to commerce as commodities for use or exchange.”

So, how has this mess been kept secret for so long? How serious is the lack of transparency problem? Well, a lot of the single stream loads were shipped to China, and other developing countries. Until now, U. S. citizens were more interested in convenience than transparency.

Single Stream needs to be eliminated, NOT glass!

Recycling glass vs. using virgin resources reduces mining waste by 80% and reduces water use by 50%. Single stream is what needs to be eliminated, NOT Glass. Not only does glass cause contamination problems for paper mills, plastic and metal factories, glass cannot be used when collected via single stream. During 2017 many curbside recycling contracts around the United States were re-negotiated, with glass being pulled from their single stream programs. Was your city one of these?

What Entrepreneurs, Engineers, and Investors can do:

Major garbage haulers’ single stream recycle trucks operate like garbage trucks, dumping all bin contents into a single compartment. What a mess. Below are ideas for those who want to design, build, and invest in 21st century recycle trucks that provide end-users with high quality feedstock.

What Citizens Can Do:

Vocabulary clarification: curbside collection can be either curb-sort or single stream.

Make your community a national model in providing high quality
feedstock to end-users!